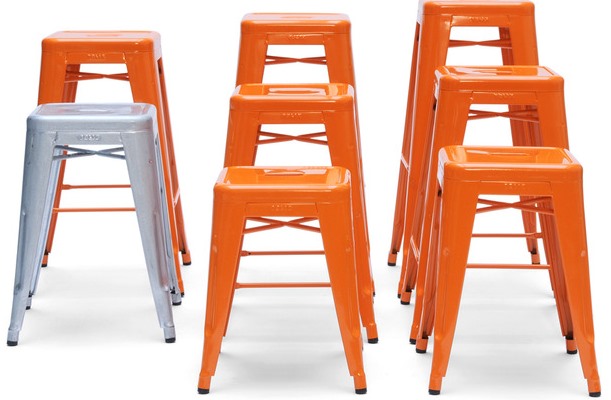 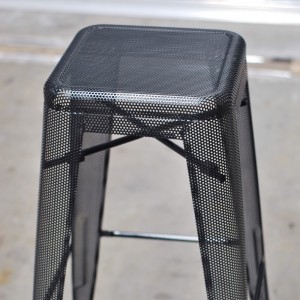 In Australia, or as I like to call it “Great Southern Land of the Knock off”, not just classic chairs but any product that might be selling well, even one from a young upcoming Australian designer, can be copied and sold under the guise of a “replica”.  It’s not only the online or low cost furniture retailers that sell “replicas”.  Recently a large European supermarket chain did a major advertising campaign including TV advertising, selling “replica” furniture, something that would be illegal in its own country.

In Australia I believe that it’s wrong and misleading that any company can sell a copy of a product under the name of the designer or the name of the product, just by placing “replica” in front of its name.

Well that’s my little rant over and it’s a discussion that has been done before.

But the question should be asked, how can replicas be so much cheaper than the original?

Well there are two easy ways to reduce costs significantly; produce in a country with a low cost manufacturing base and use cheaper materials to make the product.

So what are the standards of the factories in these low cost manufacturing countries, what are the conditions for the workers and what manufacturing standards are in place? Unfortunately, for most Australians it’s a case of out of sight out of mind until something media worthy, such as a fire in a garment factory in Bangladesh in 2012. The fire killed over 100 sweat shop workers. But realistically the majority of people in Australia won’t care, but something a bit closer to home….. 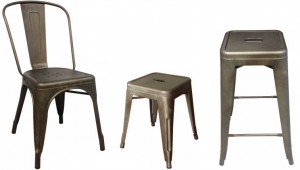 What are you taking into your home when you buy a replica, what are they made of?

I thought I would put it to the test after one of my friends mentioned that the company he works for has a machine that’s used to find out the composition of materials or products.

It uses X-Ray fluorescence to analyse and then immediately it gives a digital recording of what’s in a product and in what quantities.  It’s a recognized screening tool used by the US Customs, the US environmental agency and other international agencies checking for hazardous substances in consumer goods.

This portable XRF analyser is like something out of Star Trek, remember the tricorder! Actually that’s not far off the mark as a similar product is currently used on the Mars Rover.

So I ventured to the dark side and bought a couple of replica “Tolix” stools, possibly the most copied product in Australia. Every second café seems to have a version – usually quickly rusting away.

Using the Delta XRF we tested them along with an authentic Tolix® stool and we got some very interesting results.

What it showed was that the Tolix® had no significant levels of hazardous substances but it was a different story with the replicas. One stool showed elevated levels of lead of more than 300 parts per million (ppm), the US the Consumer Protection Safety Commission requires less than 100 ppm of lead.  We investigated further and removed the surface of paint and tested the bare metal underneath. It showed that it was the paint that contained the lead. Both replica stools also showed elevated levels of lead in the welds which means they used lead in the solder. The Tolix® stool showed a copper solder was used rather than the hazardous and weaker lead.

Both copies showed high levels of zinc that implies a lower grade of steel was being used, unlike the Tolix® stool that showed no zinc.

The second replica showed high levels of mercury of more than 1,000 ppm, another hazardous material. This would need further laboratory testing to confirm as there can be an overlap with the zinc content in this method of testing. The authentic Tolix® showed no levels of mercury.

Interestingly the Tolix® Company in France had also done some laboratory testing and found that the replica product they tested had a lead content of 4.4% or 44,000 ppm!

So what does this mean? Obviously using the cheaper materials will reduce the strength and as such how long the product will last for. It will be more prone to breaking and increase the risk of injury.

So when it breaks what happens to the product?  Does it get recycled or repaired or does it just get thrown out in the rubbish, then into landfill where it will eventually degrade into the earth leaving its poisonous residue. So you may not care how you leave the earth……

But what are you taking into your home? 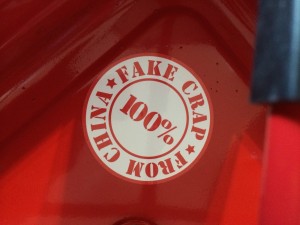 The detrimental effects of lead, especially to babies, young children and pregnant woman, have been known for a long time.  In the worst cases exposure can cause brain damage and even death; so in developed countries lead was phased out of the painting process many, many years ago. However the manufacturing standards for products in the emerging nations are not as stringent.

At this time we have only tested two copies but the questions have to be asked. Is a poor quality product that is short lived, a product that may poison the environment and increase individual exposure to poisonous materials…… really worth it?