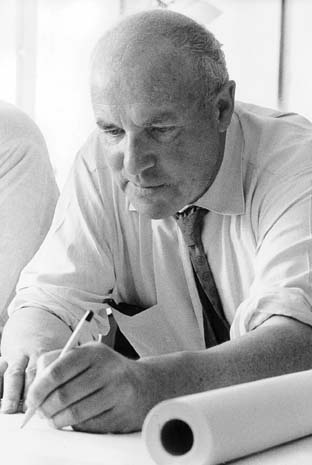 A defining style as architect and furniture designer

Egon Eiermann designed furniture for everyday use; his design language was adapted to the user’s physiological needs. He was the first person in post-war Germany to design furniture for series production which was consistent with the modernist tradition, maintaining its position internationally in terms of form and functionality. A milestone in modern furniture design.

Egon Eiermann (1904–1970), architect and furniture designer: For Eiermann furnishings are part of the overall architectural concept.

1922 Eiermann was already gaining building experience before he started his studies.

1928 After completing his studies, Egon Eiermann joined the Karstadt AG site office and after that the Berlin power station.

1931 Eiermann became a member of the German Werkbund and the Bund Deutscher Architekten. He started his own architect’s office.

1937 Eiermann designed “Gebt mir vier Jahre Zeit” [Give me four years] for the propaganda exhibition. From 1938 onwards his office was designing industrial buildings.

Seat and back optimally adapted to the human shape: The SE 42 three-legged chair consists completely of molded wood; a unique innovation with highly distinctive lines.

1945 When his Berlin office suffered war damage, Eiermann made a new start as an architect in Mosbach (Odenwald).

1947 Egon Eiermann was appointed to the chair of architecture at the Karlsruhe Technische Hochschule.

Take a seat please! Swivel stool SE 43 and swivel chair SE 40 resplendent with all the strengths of Eiermann design: These chairs have distinctive presence but are unpretentious.

1948 Eiermann moved his architectural office to Karlsruhe, where he worked as an architect until he died.

Stackable stool S 38 S/1 and bar stool SB 38: The delicately shaped seat and slender construction have an elegance that is never obtrusive.

1950 In the USA Eiermann grappled with American design; he met Gropius and Breuer, and later Mies van der Rohe.

Organically shaped seats and backs made from molded wood: The four-legged chair SE 68 SU is stackable and has a linking device for use in rows in large rooms.

Minimalistic but with powerfully expressive lines: This classic from 1951 is still cutting edge today. The four-legged chair is also available with armrests and writing tablet.

A design program convincingly realized: The couch or café table SE 330 is also light and stable, slender but substantial, refined and modestly informal.

SE 18 Folding chair: In the Museum of Modern Art in New York since 1953, at the Brussels World’s Fair in 1958 – and still today it has not lost an ounce of its original charm.

1955 As a stylistically influential college teacher and architect, Eiermann became a member of the Berlin Academy of the Arts.

A highpoint in his career: Eiermann with Sep Ruf designed the glass-cube German pavilion for the Brussels World’s Fair.

Continuation of modernism: With his non-dogmatic designs aligned with Bauhaus ideals Eiermann determined the image of the young German republic. The internationally renowned German pavilion at the 1958 World’s Fair in Brussels was one of his most significant buildings (in collaboration with Sep Ruf).

Compellingly functional and the absolute favorite of many architects: For the 1958 World’s Fair, Egon Eiermann created a swivel chair with the special structural form of the Brussels base frame.

A frequently criticized but distinctive feature of post-war Germany: Horten tiles – ornamental cladding designed by Eiermann for the Horten department store. It allowed for a highly flexible building floor plan and, by means of structural unification, it also provided a consistent corporate identity for the store chain. The famous Horten façade: Eiermann developed a superior, abstract facade without reference to its urban context.

Eiermann’s new construction in 1961 represented one of the most famous buildings of post-war modernism in Germany – in a central area of what was then West Berlin. The modern ensemble of octagonal nave, separate bell tower, foyer and chapel displays a responsible and reflective handling of issues around post-war reconstruction. Eiermann won the competition and implemented the reconstruction of the Kaiser Wilhelm Memorial Church in Berlin.

1964 Eiermann conceived a terraced construction for the German Embassy in Washington, integrated into the grounds.

In 1953 Eiermann designed the famous E1 metal table frame for work in an architect’s office. The construction consists of two side-piece frames securely welded to the table frame with a diagonal cross-shaped rod; on the top was a simple wooden board. In 1965 his assistant modified the table to create the E2 that could be dismantled and transported.

1967 Main headquarters of IBM in Stuttgart – one of the most important buildings of Eiermann’s later work.

1968 The Olivetti high-rise towers in Frankfurt were not finished until two years after Eiermann’s death.

1969 The high-rise parliament building in Bonn was an architectural expression of democracy.

Egon Eiermann is seen as the architect of the early Federal Republic period. Not least for his parliament high-rise building in Bonn, inaugurated in 1969. As an architectural expression of early post-war democracy, Eiermann’s concept was of logic, purity and clarity. The Parliament high-rise in Bonn, known as the Langer Eugen, is one of the most famous of Eiermann’s buildings.

Amongst a number of other great exponents of German post-war architecture, Egon Eiermann was a champion of functional aestheticism and constructional clarity. He was one of the most significant advocates for the rebuilding of a war-ravaged Germany. The continuation of modern building in the young, cosmopolitan Federal Republic owes much to his influence.

1970 As an architect, furniture designer and college teacher he was an important inspiration in post-war Germany: Eiermann died on July 19, 1970.

2004 A German postal service stamp was dedicated to the memory of Egon Eiermann. 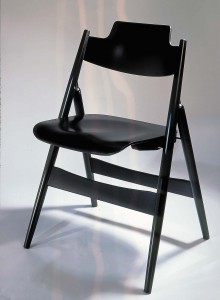 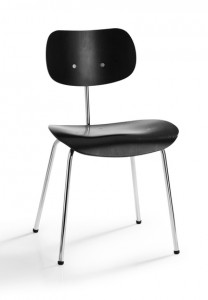