“If there’s one thing where I’m really obstinate, it’s flexibility”

In Aschau on the Chiemsee it seems another wind blows. One from the North-West, and that has a mind of its own, but which brings a breath of fresh air into the world of design. A pirate’s flag under the Bavarian blue and white skies. Nils Holger Moormann positions himself somewhere between the conventions of conventionality and makes himself comfortable amidst his pieces of furniture. They are not unlike the man himself: ascetic, well thought through, and with a nod and a wink to posterity that is easily missed.

As an autodidact, someone foreign to the branch and a free spirit, Nils Holger Moormann is the epitome of ‘Neues Deutsches Design’ and from 1982 onwards has developed with a number of mostly young, unknown designers as well as with his own Creative Department furniture which exhibits a reduced formal language and precise solutions to detail. Sounds simple enough. And it is in a way, as the bookshelf FNP – a classic in its own right – demonstrates. The key thoughts are simplicity, intelligence and innovation, and these colour the company’s entire philosophy. At times this makes life uncomfortable, creates an edginess or even a defensiveness at times, but it speaks volumes for the timelessness and true Zeitgeist of the pieces themselves. Where better then for this furniture to find its roots – between the raw mountain climate and tradition as it is lived out, between the stubborn beasts of the field and a far-reaching sense for ecological balance? And this is why almost all the products are built by local artisans, sent on their way directly from the company headquarters, and available from selected outlets around the world.

We know that Nils Holger Moormann can not sit still for too long, and will not be content to lean back and contemplate the current collection. Thus, there is now a chance to stay overnight as a guest, in order perhaps to centre oneself once more. The guesthouse ‘berge’, with all its corners and corridors, offers the opportunity to keep things to the minimum again: bear things, lie down, cook whatever and simply live life. It’s a golden rule. And authentic to boot. Just another two characteristics that the company holds dear to its heart, from top to bottom.

All of this is not easy to pigeonhole. Which is in itself rather good, as this lateral thinker believes. He’s happy to enjoy his reputation and the numerous design prizes, before setting off to sit on the next competition jury.  Any new ideas and deliberations will certainly not be put off until tomorrow. 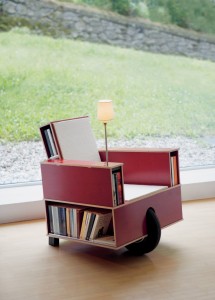 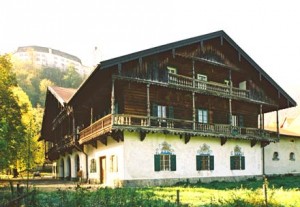