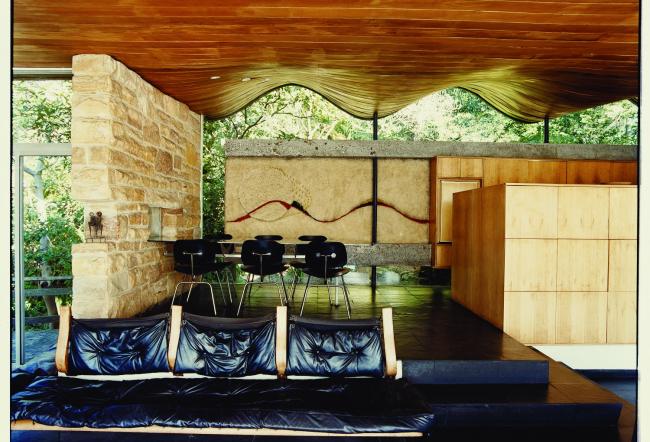 Following on from the last post on the exhibition “Iconic Australian Houses” by Karen McCartney, we are delving inside these iconic houses and in particular looking at iconic chairs.

The Rose Seidler House was Austrian Harry Seidler’s first commission ‘the most talked about house in Sydney’ when finished in 1950 and it was awarded the Suliman Medal the following year. Designed for his parents Rose and Max, it was what brought Harry Seidler to Australia. Which I suppose was a good way as any to get your son to visit! Harry was a refugee from World War Two.  He managed to secure a scholarship which allowed him to study at Harvard under Walter Gropius and Marcel Breuer, work with Alvar Aalto and the painter Joseph Albers. In New York from 1946 to mid1948 he was the first ever assistant to Breuer. He then went to Brazil for a summer of work with Oscar Niemeyer. So with all these influences it’s no surprise, that the house is the first and one of the finest examples of mid 20th-century modernist homes in Australia. 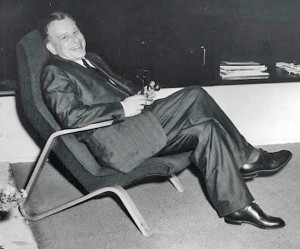 Knowing he wouldn’t get what he wanted in Sydney, he visited stores in New York to order furniture, fittings and of course chairs. In the Seidler house there are Grasshopper and Womb chairs by Eero Saarinen and the B.K.F. chair or commonly known as the “Butterfly” chair by Argentinians Antonio Bonet, Jorge Ferrari-Hardoy and Juan Kurcha. But the first iconic chair we will look at in this iconic house is one of my favourites; the Eames Lounge Chair Metal or LCM.  A not so close look at the Seidler LCM’s you can see that the connection between the frames and the seat has been repaired somewhat agriculturally by a 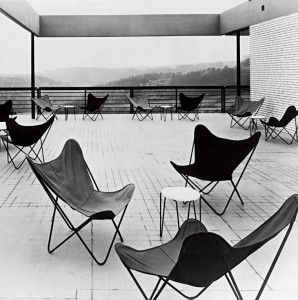 previous tenant by boring through and bolting the frame, shock mount and plywood together. After nearly seventy years they are still a working chair and look great even with the bolts! I agree with Daniel Orstoff the curator of the Eames Designs website, an online encyclopaedia of all things Eames, who believes that product’s such that have been repaired or hacked by its user to continue its usable life is the narrative of that product and something unique that should be appreciated.

Sourced in NY before Harry left for Australia these examples are very early versions by the Moulded Plywood Division of Evans Products. A large industrial company whose owner Colonel Edward S. Evans also owned swaths of Douglas Fir and Cedar forests. The Colonel (Evans not Sanders) could see plywood as a way to utilise these resources. Charles had been manufacturing plywood leg splints for the war effort but had major cash flow issues due to slow payment by the US Government. So an arrangement was made for Evans products to buy the rights to produce and distribute the splints. With Charles now as the ‘Director of Research and Development’ 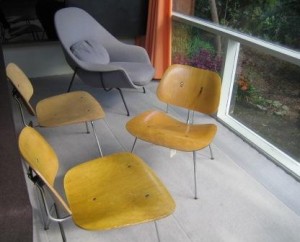 they continued to make splints as well as other products including plywood parts for aeroplanes. The splints were integral in the development of a complex curve in plywood which allow the creation of the organic form of the chairs.  They did the first run of 1,000 DCMs in the summer of 1946 in Los Angeles. So I think it’s a good bet that the Seidler House DCM’s are from that first run.  In June 1946 Herman Miller took on first the marketing and distribution, then total rights to manufacture and distribute all Eames furniture products. This was really the start of Herman Miller 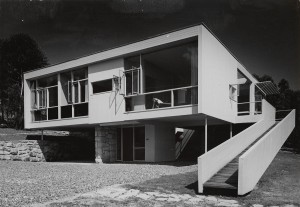 becoming a major player in the furniture industry and with George Nelson and Charles Eames on board they had access to two of the greatest American design talents of the 20th Century.  This talent came to Europe 1957 when Vitra, then a shop fitting company, became Herman Miller’s licenced manufacturer for Europe. This relationship continued until 1984 when Herman Miller decided to enter the European market with the Action Office furniture system. So from then on Vitra had the rights to manufacture Eames and Nelson products for Europe and the Middle East and Herman Miller introduced AO to Europe…. I know who got the better deal there!